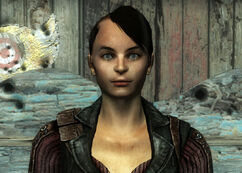 “Well, hello there young traveler. The fates had told me that I would receive a visitor today.”

Madam Panada is one of the inhabitants of Point Lookout. She is a merchant and owner of House of Wares in the year 2277. She is a friend of Tobar the Ferryman and he receives a cut for referring her, according to him.

Madam Panada's House of Wares offers a variety of badly repaired items, as Panada herself is only trading to make a living. Her real calling (so she believes) is divination.[1]

She is a friend of Tobar the Ferryman and he receives a cut for referring her, according to him.[2] Little is known about Madam Panada's past. She also mentions that she learned many repair tricks from her father.[3]

Panada appears only in the Fallout 3 add-on Point Lookout.

Panada's personality and speech mannerisms are similar to those of a stereotypical fortuneteller.

Retrieved from "https://fallout.fandom.com/wiki/Panada?oldid=3382138"
Community content is available under CC-BY-SA unless otherwise noted.