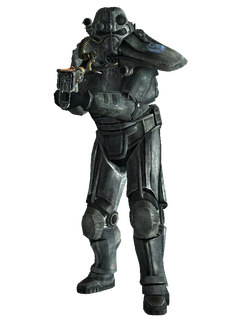 “Does this sound noble enough? "Quail before me, foul super mutant! Thine end is at hand! Yield, that I may ease thine suffering!"”— Paladin Kodiak

Contrary to the original Brotherhood of Steel, Owyn Lyons has changed the rank system - paladins are no longer a separate caste, but a rank (albeit a high one) instead. Paladins lead the squads of knights and go first into combat. They are usually more heavily armed and may get even the most advanced of weapons. Brotherhood of Steel paladins are some of the toughest human combatants in the Capital Wasteland, second only to the soldiers of the Enclave. After the Broken Steel add-on, Brotherhood of Steel paladins become more of a match to Enclave grunts. Some will carry Tesla cannons and Gatling lasers while assaulting Adams Air Force Base.

The paladins inside the GNR building in Fallout 3, cannot be mezzed. They will turn hostile and the other Brotherhood members in the building, the paladin will go unconscious when killed by the other brothers, and then when getting up all members of the Brotherhood will be hostile to the player character. It is unknown if this occurs elsewhere.[clarification needed]The paladin guards outside the Citadel can be mezzed and sold, or looted. This does not affect Bael.

These paladins appear only in Fallout 3.

Retrieved from "https://fallout.fandom.com/wiki/Paladin_(Fallout_3)?oldid=3378812"
Community content is available under CC-BY-SA unless otherwise noted.