Increased damage and chance to stagger enemies by sprinting into them with Power Armor.

Discard to gain a movement point and kill certain enemies 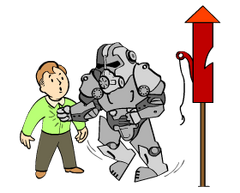 Pain Train is a perk in Fallout 4, Fallout 76 and Fallout: The Board Game.

“Choo-choo! All aboard! Turning Power Armor into an offensive weapon? What an exceptional idea: As long as you have the Action Points to complete a sprint before switching to your favoured weapon and you're focusing on Power Armor as a main source of protection, this can prove an excellent deterrent, at any time during combat.”— Fallout 4 Vault Dweller's Survival Guide description

“Choo choo! All aboard!”

Once obtained, the Pain Train perk can be discarded in order to obtain an additional movement point. For the rest of the turn, when the player character moves, they will automatically kill any enemies in the same space whose level is equal to or less than the player character's armor.

This perk can stop working without reason, preventing enemies from being damaged, staggered or knocked down, as though the Perk was never taken.[verified]

Loading screen slide
Add a photo to this gallery
Retrieved from "https://fallout.fandom.com/wiki/Pain_Train?oldid=3437819"
Community content is available under CC-BY-SA unless otherwise noted.