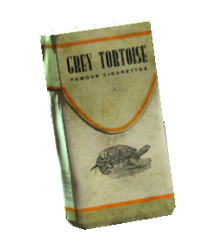 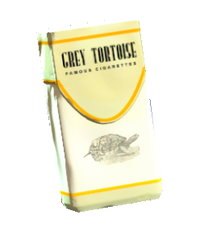 A pack of cigarettes and preserved cigarette pack are junk items in Fallout 4.

A small box containing pre-War cigarettes. They can be used as decoration, sold, or broken down for crafting components. This box is labeled with the name of a brand or company, "Grey Tortoise." An image of a tortoise is seen on both sides of the box. On one of the sides, there is a bar code.

The preserved version can be found in regions such as vaults and Cabot House which were not exposed to radiation. It is functionally identical aside from a higher value and cleaner texture.

The cigarette pack can be broken down into its individual components for use in crafting:

Retrieved from "https://fallout.fandom.com/wiki/Pack_of_cigarettes_(Fallout_4)?oldid=3253780"
Community content is available under CC-BY-SA unless otherwise noted.