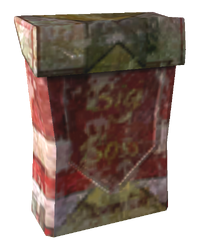 A pack of cigarettes is a miscellaneous item in Fallout 3 and Fallout: New Vegas.

Packs of Big Boss brand cigarettes are abundant in both the Capital and Mojave wastelands, and can be found in many locations or purchased from merchants. Like other cigarettes, they can be traded but cannot be smoked by the player character.

Jericho will smoke any cigarettes placed in his inventory.

The cigarette's brand name "Big Boss" may be an allusion to the popular stealth/action series Metal Gear and Metal Gear Solid. One of the primary characters in both series is code-named Big Boss. Cigarettes are a recurring inventory item in almost every Metal Gear game. In addition, in Metal Gear Solid 4, the brand of cigarettes used during the game is The Boss brand, similar to those in Fallout 3 and Fallout: New Vegas.

Retrieved from "https://fallout.fandom.com/wiki/Pack_of_cigarettes_(Fallout_3)?oldid=3484218"
Community content is available under CC-BY-SA unless otherwise noted.