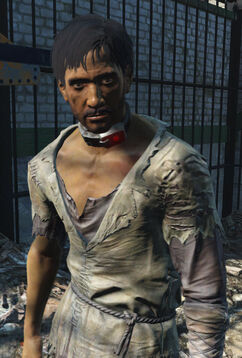 Pack captives are enslaved people living in the Bradberton Amphitheater in Nuka-World in 2287.

They are slaves belonging to the Pack, put on display as trophies, along with the other wild creatures that have been captured. Some will be seen sweeping, which indicates that their purpose is to clean up after the disorderly raider gang. Also, on occasion one will be put into the fight pit to battle to the death against another tamed creature as form of entertainment for pack members.

The five pack captives in the cage near the entrance of the theater will always respawn. This can be a useful source of shock collars.

Pack captives appears only in the Fallout 4 add-on Nuka-World.

Retrieved from "https://fallout.fandom.com/wiki/Pack_captive?oldid=3257105"
Community content is available under CC-BY-SA unless otherwise noted.