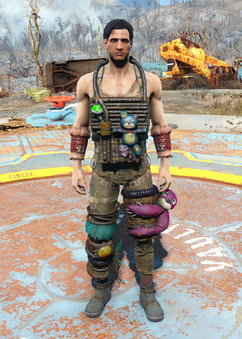 The Pack armor is an armor set in the Fallout 4 add-on Nuka-World.

The Pack armor is the default armor set worn by members of the Pack inhabiting Nuka-World. It comes in two variants, light and heavy.

The light variant's vest is made up predominantly of plastic tubing bundled together and tied around the wearer's neck. A souvenir teddy bear is attached to the front. The armbands are made up of salmon-colored fur clamped to the forearms by a red cuff. The leg pieces are a mishmash of leather and different types of tubing wrapped around the thighs, with a souvenir sloth toy hugging the left leg.

The heavy variant's chest piece is now composed of shaped pieces of red metal fitted over most of the wearer's torso and shoulders. A thick plastic tube is wrapped around the neck, with the same souvenir teddy bear from the light variant impaled on the tubing. The armbands no longer match, with the left arm being a teal armband with bright decorations, and the right arm being a faded blue furry bracer adorned with jewels. The leg pieces are now composed of blue straps holding bones and rough plates to the wearer's thighs, along with furry red boots.

The Pack stuffed chest piece is sold as a prize at the Nuka-Cade for 3750 Nuka-Cade tickets (items rotate every couple of days).