Carry weight is increased by 50 lbs.

Items with a weight of two or less weigh half as much for you.

Increased reduction of weight of all junk items. 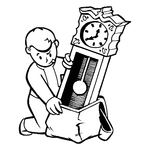 You are efficient at arranging your inventory in general. This makes it much easier to carry that little extra you've always needed. This is useful for characters with low Strength, i.e. sharpshooters and mediators.

Its usefulness is reduced in Fallout 2 with the addition of larger teams of traveling companions and the Highwayman's trunk.

Fallout: New Vegas hardcore mode applies weight to ammunition, which could cause this perk to be especially useful, allowing you to carry twice as much ammunition at the same weight. Note that with this perk, all affected items in the game world will display their new, lower weight whether or not they are in your inventory. (This does not change companion carrying capacity—they still carry these items at full weight.)

“You see beauty in the rubbish.”

This perk does not affect the weight of junk items stored in a stash box. Any junk placed in the stash returns to its default weight.

Retrieved from "https://fallout.fandom.com/wiki/Pack_Rat?oldid=3428701"
Community content is available under CC-BY-SA unless otherwise noted.