The Pacific Ocean, referred to by some tribals as the Great Salt Water,[1] is the worlds largest and deepest ocean.

By January of 2073, one of the last known pockets of oil was discovered 175 miles off the coast of California. After sabotaging a Chinese attempt,[2] the Enclave successfully constructed an oil rig directly over this oil. This would eventually become their main base after the bombs fell. The nuclear reactor in the platform created significant levels of pollution in the surrounding ocean water. This nuclear waste was carried along with the currents, causing devastating ecological damage to the coast of Mexico.[3]

The Pacific Ocean is a vast body of water, stretching from the western coast of North and South America to the eastern coast of Asia and Australia.

The Pacific Ocean appears in Fallout and Fallout 2, and is mentioned in Fallout 3, Fallout: New Vegas, Fallout 4, and in Fallout 76. 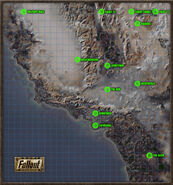 The Pacific Ocean as seen on the Fallout map 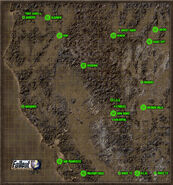 The Pacific Ocean as seen on the Fallout 2 map