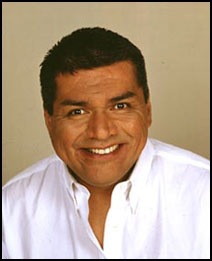 Get liquor for Pablo

Pablo Riviera is the owner and proprietor of the Look Out Below Café & Bar in Hoover Dam in 2253.

Pablo Riviera is the owner of a swanky, big shack that serves great spirits and good fun... well, it used to before the Brotherhood of Steel war. Unfortunately for Pablo, those happy days are gone. His regular supplier of alcohol, the 3-Some Caravan Company, has not been able to get fresh stock to him for some time. No hooch means no customers, and poor Pablo is feeling the pinch.[1] Since he is a proud man, he refuses to give into pressure and strong-arming from the Crimson Caravan Company, so he sticks with 3-Some, who always gave him a fair price and respect. Thus, Pablo the barkeep is about as destitute as can be. He'd drink himself into a drunken stupor if he had enough liquor, but he does not.[2]

Pablo has a two bedroom shack overlooking the toxic lake for sale, the Prisoner can buy it for a highly inflated price, although helping Pablo with his liquor problem will see him lower the asking price dramatically.[2]

Pablo Riviera was going to appear in Van Buren, the canceled Fallout 3 by Black Isle Studios.

Retrieved from "https://fallout.fandom.com/wiki/Pablo_Riviera?oldid=3123916"
Community content is available under CC-BY-SA unless otherwise noted.