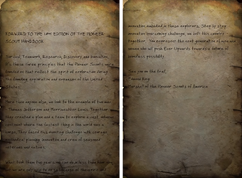 is a paper note in Fallout 76.

The note can be found upstairs in the Pioneer Scout camp mess hall building.

Survival, Teamwork, Research, Discovery and Innovation. It's these five principles that the Pioneer Scouts were founded on that reflect the spirit of exploration during the founding, exploration and expansion of the United States.

More than anyone else, we look to the example of two men - Thomas Jefferson and Meriwether Lewis. Together they created a plan and a team to explore a vast, unknown continent where the fastest thing in the world was a horse. They faced this daunting challenge with courage, methodical planning, innovation and crew of seasoned veterans and natives.

What took them two years we can do in less than an hour now, but we are only able to do so because of the spirit and innovation embodied in these explorers. Step by step, innovation overcoming challenge, we built this country together. You represent the next generation of men and women who will push Ever Upwards towards a future of boundless possibility.

See you on the trail,
Edmund King
Marshall of the Pioneer Scouts of America

Retrieved from "https://fallout.fandom.com/wiki/PIONEERBOOK:_Foreward?oldid=3151159"
Community content is available under CC-BY-SA unless otherwise noted.