The Waters of Life
Picking Up the Trail
The American Dream
Take it Back!
Death From Above

EyebrowOldMBeardFull
BeardFullOld
“Here I sit, in the safety of the Citadel, while the people of the Wasteland thirst, and suffer, and die. Here I sit, a failed, feeble old man.”

Elder Owyn Lyons is the leader of the East Coast Brotherhood of Steel in 2277.

Lyons was originally a Brotherhood of Steel paladin stationed at the Lost Hills bunker in California.[Non-canon 1] When the Brotherhood's ruling council decided to send a contingent of soldiers to the East Coast, they chose Lyons and indicated three important objectives. First, to scour the ruins of Washington, D.C., once the nation's capital, and recover any and all advanced technology. Second, to investigate the reports of super mutant activity in the area.

A small but hardened contingent of Brotherhood of Steel soldiers, led by Paladin Lyons and accompanied by his daughter Sarah, friend and technological adviser Scribe Rothchild, as well as Star Paladin Cross, Paladin Henry Casdin, Initiate Ishmael Ashur, Paladin Tristan, Knight Colvin and Paladin Gunny set out from Lost Hills and began the journey east to what was once Washington D.C.

Lyons' group finally arrived in the Capital Wasteland in 2255, establishing a base of operations within the Citadel.[1] Though the structure was damaged, its sub-levels remained intact and its stockpiles contained undisturbed pre-War technology and weaponry to sustain their operations, including a large robot known as Liberty Prime.[2] The discovery of Liberty Prime earned Paladin Lyons a battlefield promotion to elder, and a new directive from his superiors in Southern California: to establish a new, permanent Brotherhood base in the Capital Wasteland, and continue the search for any other advanced technology hidden in the former capital city's ruins.

The newly appointed elder decided that the super mutants were a threat not just to the Brotherhood and their scouts in D.C., but all the people in the wasteland.[2] Thus, he began to direct resources towards fighting the mutants, gradually reducing the importance of fulfilling the primary mission objective, that is, recovering technology. By 2277 there had been no communication between the East Coast chapter and Brotherhood HQ for years.[3]

Due to the doctrine of loyalty the Brotherhood taught them from birth, the majority of the Brotherhood forces supposed Lyon regardless of struggles encountered.[4] However, there were soldiers under his command dissatisfied with Lyons' focus on protecting the wastes by killing super mutants, seeing it as an ineffectual waste of men and resources that would ultimately destroy the Brotherhood. The situation gradually worsened, finally tipping when Elder Lyons ignored their repeated requests to recover tech from Fort Independence, a pre-War scientific military base.[5] A group broke off, called themselves the Outcasts, and consider Lyons a traitor.[5]

As the leader of the Brotherhood of Steel, Lyons spends most of his day in the Citadel laboratory, A-ring or B-ring. He regularly converses with Scribe Rothchild, Bowditch, and Peabody on their various projects. In addition, he checks up on the progress on the Brotherhood's major project, rebuilding Liberty Prime, and supervises the armory as well as the smithy. When he is not working in the Citadel lab, he is usually eating in the A-ring's great hall, studying in his room in B-ring or sleeping. 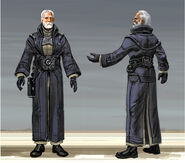 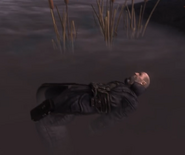