Owlet is a creature in Appalachia.

Owlets are juvenile owls which have been rendered nearly featherless by mutation following radiation exposure. They are flightless but have adapted to this by living in caves and can quickly hop along the ground to escape predators.

Owlets were originally cut from Fallout 76, but were introduced in the Wastelanders update. 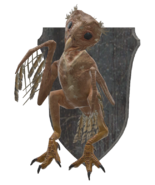