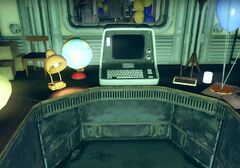 The tape can be found inserted into the overseer's terminal in Vault 76 or can be given by Pennington just outside of the Vault.

The Overseer: Overseer's log, or should I say, direct communication. Because whoever is listening to this had the moxy to try to find out where I've gone.

But I'm glad you did. Truth is, I need your help. I've been given a task, and... I've decided to break protocol and tell you what it is. Because If there's one thing I've learned in these past few years, it's that we need to rely on each other.

There were three active nuclear silos in Appalachia before the bombs fell. They blew up the world before. We can't let it happen again. So we've got to locate and secure all of the silos, or die trying. Hopefully the former. Hmph.

But it's been twenty-five years. I just don't know what we're going to find out there. Or where to start... My directive was to go to the nearest population center and assess the situation. I'll set up a C.A.M.P. on the way once I get my bearings. Find me there.

Retrieved from "https://fallout.fandom.com/wiki/Overseer%27s_log_-_Vault_76?oldid=3159632"
Community content is available under CC-BY-SA unless otherwise noted.