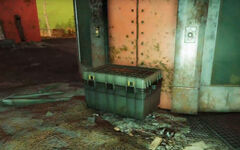 Overseer's log - Top of the World is a holotape in Fallout 76. It was recorded by the Vault 76 overseer.

The tape can be found at the Top of the World in an overseer's cache in front of the elevator doors.

There's someone in control of this old ski resort, and if I ever find her, I'm going wash her mouth out with the first thing vaguely resembling soap I can get my hands on. *exasperated grunt of disgust* Selfish. That's the word. Maybe that's why she's alone. Maybe that's why she's survived. But the only way she'll tell me what she knows is if I help her first.

All the good people I've learned about who've died, and it's the sociopath who still gets to live...

Retrieved from "https://fallout.fandom.com/wiki/Overseer%27s_log_-_Top_of_the_World?oldid=3200983"
Community content is available under CC-BY-SA unless otherwise noted.