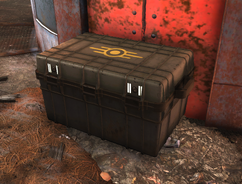 The overseer's cache is a container in Fallout 76.

They have been left by the overseer of Vault 76 as she has traveled across Appalachia during her mission. She has left her holotape logs for the player character to listen to as they track her. She has also left plans, ammo, food and water in each cache to help the player character survive.

They are similar in appearance to the player character's stash boxes but are olive green and have a yellow Vault-Tec logo on the top.

Retrieved from "https://fallout.fandom.com/wiki/Overseer%27s_cache?oldid=3077743"
Community content is available under CC-BY-SA unless otherwise noted.