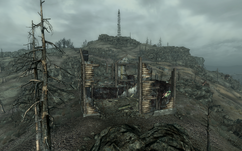 The overlook raider shack is an unmarked location in the Capital Wasteland in 2277. It is located just west of broadcast tower KB5.

This location consists of a ruined house with a wrecked, four-door Corvega and a Flea parked in front of it. The house itself is marked with various types of graffiti. Four raiders patrol the inside of the house and the surroundings.

The overlook raider shack appears only in Fallout 3.

Add a photo to this gallery
Retrieved from "https://fallout.fandom.com/wiki/Overlook_raider_shack?oldid=3356956"
Community content is available under CC-BY-SA unless otherwise noted.