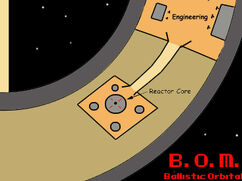 Overload reactor core was going to be a quest in Van Buren, the canceled Fallout 3 by Black Isle Studios. It was located in B.O.M.B.-001.[1]

Overloading the reactor core will cause the emergency launch protocol to kick in and five minutes later, the station to blow up.

The PC can try to access the reactor computer that sits next to the Reactor Core. Once accessed, the player, if his Science skill is high enough (> 100), can program the reactor to overload. Once initiated, the emergency launch protocols[2] initiate and the station will blow up in ten minutes – giving the player time to fight his way out, if he wants.

Retrieved from "https://fallout.fandom.com/wiki/Overload_reactor_core?oldid=2151422"
Community content is available under CC-BY-SA unless otherwise noted.