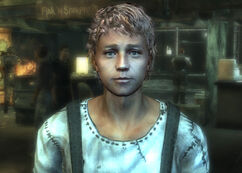 “Make it quick will ya, I'm coming down and I gotta get my fix.”— Paulie Cantelli

Overdose is an unmarked Fallout 3 quest.

Paulie is a chem addict. He is always begging for more and more chems, like Psycho and Buffout. The Lone Wanderer can give him Psycho for negative Karma.

Negative Karma (-100) every time he is given Psycho.

Cindy Cantelli, Paulie's wife and owner of A Quick Fix, will be relieved when Paulie dies because she can finally make a profit off of her products due to Paulie no longer taking chems from her store. One Psycho is enough to make Paulie OD, to exploit the Karma loss, enter a new dialogue as soon as the previous closes to give him additional ones. Paulie usually goes to an unused room on Midship Deck to use the Psycho, the first on the right as one enters from the stairwell, with a Hard locked filing cabinet.

Retrieved from "https://fallout.fandom.com/wiki/Overdose_(quest)?oldid=3163126"
Community content is available under CC-BY-SA unless otherwise noted.