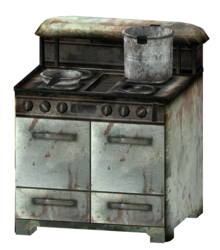 An oven is a pre-War device in Fallout 3 and Fallout: New Vegas that has no real purpose other than storing lootable items.

Small items such as bottles of Nuka-Cola can be placed on the rear shelf for display. Ovens are a good source for pilot lights if the player is looking for miscellaneous components. They can also contain foods such as iguana-on-a-stick, squirrel on a stick, and other regular food items. On top of them, there are also occasionally pressure cookers, metal cooking pots, pans, and other food items.

Ovens can be found almost anywhere in the wasteland of Fallout 3 and Fallout: New Vegas, mainly where there are houses or people.

In Tranquility Lane, the Lone Wanderer may choose to go about one of the bad Karma options of beating the quest. There is the option of killing Mrs. Henderson on the orders of Betty, specifically in a creative fashion. The player can remove the pilot light of Mrs. Henderson's oven to cause a gas explosion when opened by its unfortunate victim.

The oven resembles a Jenn-Air electric, with a center-mounted grill flanked by electric burners.

Retrieved from "https://fallout.fandom.com/wiki/Oven?oldid=3454227"
Community content is available under CC-BY-SA unless otherwise noted.