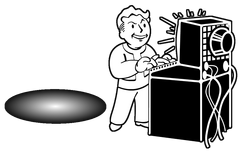 “Remember to bring me that holotape as soon as you return from the Institute.”— Ingram

Outside the Wire is a Brotherhood of Steel main quest in Fallout 4.

During the infiltration of the Institute, Proctor Ingram has ordered the Sole Survivor to copy data from one of their terminals using the network scanner holotape.

Access the terminal at the Institute relay area and entrance then insert the network scanner holotape to extract the data. From here, simply continue the rest of the main quest Institutionalized. Return to Proctor Ingram and give her the data.

This holotape may also have been given by and can be given to another faction, for example, to Sturges of the Minutemen as part of Inside Job. If so, then before giving it to Proctor Ingram at Boston Airport, the Sole Survivor will first need to retrieve it by asking for a copy of the holotape while this quest is selected in Pip-Boy. Maxson may remind the player character of the need to complete the turn-in to Proctor Ingram but he will not remind them from whom they need to recover it first. Whatever quest path is taken, Quinlan will get to work on analyzing the data.

Retrieved from "https://fallout.fandom.com/wiki/Outside_the_Wire?oldid=3423022"
Community content is available under CC-BY-SA unless otherwise noted.