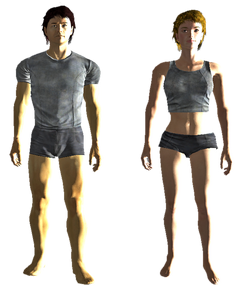 Outer Vegas defender is a wasteland adventurer class cut character from Fallout: New Vegas. A male, as well as a female character, exists in the G.E.C.K. The male has black hair, the female brownish. Given the name, they were likely to serve as guards in outer Vegas, much like Jules, Crandon and the Westside Militia.

Outer Vegas defender was added during the development stages of Fallout: New Vegas, but was cut from the final retail release of the game.

Retrieved from "https://fallout.fandom.com/wiki/Outer_Vegas_defender?oldid=3214309"
Community content is available under CC-BY-SA unless otherwise noted.