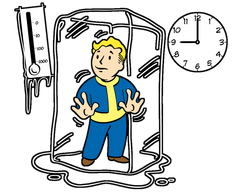 Out of Time is the second main story quest in Fallout 4.

Upon regaining control, the Sole Survivor opens their spouse's stasis pod door by means of the release switch to the right. Interacting with the spouse's body results in acquiring their wedding ring and the player character vows to find the people who killed them and get Shaun back. None of the other pods can be opened, and interacting with them reveals that everyone else is dead. There is a monitoring terminal near the end of the room which reveals that their cause of death was asphyxiation due to life support failure.[1] It also reveals that the Sole Survivor was released due to a remote override being issued.[2]

The door to the left in the hallway leads to more cryogenic pods with dead occupants and another terminal which reveals that they met the same fate as the occupants in the previous chamber. The hallway leads to another door, which is malfunctioning and will not open.[3] The Sole Survivor progresses through the hallways of the vault, to the right and then to the left, leading to a room with a window and a giant roach on the other side of the glass. Upon approach, the roach will scurry off. They will be able to find a baton on the crate directly underneath the window. There is another baton a couple of rooms further, should the former be missed.

Before heading through the door, the Sole Survivor can take a detour to the right to find a stimpak and a security terminal. The terminal details the purpose of Vault 111 and the operational protocols of its staff, plus the security logs reveal a growing discontent with the overseer of the vault culminating in a confrontation.[3][4]

Shortly thereafter, the Sole Survivor will come across a hostile radroach down the hallway. They will have to kill it to progress into the mess hall. There is a recreational terminal containing a Red Menace game holotape, which can be ejected and taken. The door to the left leads into the main power room of the vault. On the way to the staircase beyond, one will have to kill several more radroaches.

The staircase and subsequent door lead to the overseer's office, which has three stimpaks, a pair of eyeglasses and a 10mm pistol with some ammunition. The open security gate has some more 10mm ammo, another 10mm pistol, and the Cryolator inside a Master locked case. The overseer's terminal, in addition to revealing the overseer's role in what ultimately happened, also has the command to open the evacuation tunnel.

Opening the tunnel will reveal a long corridor with six radroaches infesting it, allowing for a V.A.T.S. tutorial. After clearing the tunnel and going through the exit door, the player character will encounter two more radroaches. Proceeding to the main entry area of the vault will reveal the skeleton of a dead Vault-Tec employee laying in front of the vault door controls. The player character can remove the Pip-Boy 3000 Mark IV from their remains and equip it. The exit area also contains more 10mm ammo in one of the lockers as well as an unopened new vault suit, the second of the two that can be picked up on the way.

Activating the door controls, the Sole Survivor can proceed to the elevator. Upon approaching the doors, they will be offered one last opportunity to customize their name, appearance, and SPECIAL attributes before heading out into the post-War Commonwealth.

Upon reaching ground level, the Sole Survivor lets out a gasp as the doors open, and sunlight streams towards them. They will be able to retrace the path back to the ruins of Sanctuary Hills. To the left, one will find Codsworth near their pre-War home. He will be overjoyed to see the Sole Survivor and can provide information in terms of gaining some understanding of what happened to the world and how long it has been since the bombs fell. He states that approximately 210 years have passed since the Great War. In passing an easy Persuasion check, Codsworth will give the Sole Survivor a holotape from their late spouse, titled "Hi honey!"

What follows is a companion and exploration tutorial, as the player character explores the neighborhood at Codsworth's behest, searching for signs of life. This will lead to combat with bloatflies and radroaches. When the two battles have concluded, Codsworth will suggest the Sole Survivor go to Concord to continue the search for Shaun. They can choose to kill radroaches in the other houses before moving on.

The road to Concord leads south out of Sanctuary Hills across the Old North Bridge. Down the road is a Red Rocket truck stop where Dogmeat can be found. The dog is willing to accompany the Sole Survivor as a companion. While exploring the gas station, up to six mole rats will attack the pair.

Upon entering Concord, the Sole Survivor will hear the faint sounds of gunfire as a scripted scene unfolds. Near the Museum of Freedom, three to four raiders are battling a man on a balcony with a laser musket.

If the player character assists in killing the raiders outside, the man will implore them to grab the laser musket off of the remains of the individual on the entryway stairs and head inside. At this point, the quest ends and begins the next quest, When Freedom Calls.

Retrieved from "https://fallout.fandom.com/wiki/Out_of_Time?oldid=3500685"
Community content is available under CC-BY-SA unless otherwise noted.