This is part 2 of the Ouroboros design document for Van Buren, the canceled Fallout 3 by Black Isle Studios. 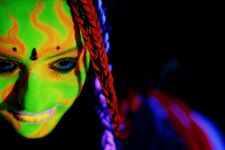 Hecate is quite insane. She truly believes herself to be the goddess Hecate, the Dark Mother, the goddess of death and rebirth. She believes that she died in the desert of the wasteland, was reborn, and elevated to the status of a god. She has no memory of her past or who she was. However, she harbors a burning hatred for all wasteland tribes and Caesar's Legion.

When she was a young woman Caesar's Legion attacked and destroyed her tribe, the Twisted Hairs. Hecate, as she is now known, was the only survivor. She wandered the desert, traveling from tribe to tribe, to try and find someone who would take her in. Every tribe turned her away. No one wanted her among them in case Caesar came looking for her and found her. After days of travel in the desert with no food or water, Hecate collapsed and gave herself to death.

When she awoke she found herself in paradise, brought back from the dead by the goddess Diana. The goddess named her Hecate, blessed her with divinity, and passed her knowledge onto her. When Hecate asked to return to the world of men, her request was granted. Now, she is a goddess incarnate.

Adrian Beyr, Follower of the Apocalypse

Adrian Beyr is a very learned man. He has spent the majority of his life traveling the wasteland, digging through ruins of cities, searching for the written knowledge of the ancients. Over the years, he has found hundreds of books and holo-disks, and taken it upon himself to read every one of them. It is through his reading that he finds pleasure and purpose in life. Adrian joined the Followers so that he would have a safe depository for the works that he found, and a safe place to return to when he desired to read them again.

During his travels Adrian heard about the Ouroboros and its resident goddess, Hecate. Intrigued, he decided to visit and request an audience. Much to his surprise, his request was granted and he found himself standing before Hecate. Unfortunately, Adrian made the mistake of quoting Greek mythology about the goddess Hecate and found himself imprisoned. He has no idea what he said to cause his predicament.

Jordon is captain of the elite city guard. He is a stern young man, devoid of any sense of humor. He takes his duty seriously and is unwavering in his loyalty to the city and the goddess that he serves. Jordan was raised in the city orphanage since the age of three years. He knows nothing of the outside world, other than what his instructors have told him, and has never traveled beyond the city walls.

It is Jordan's dream to one day serve the goddess Hecate herself as one of her elite guards. To this end he is never remiss in his duties and even reports for work when ill. Only the insistence of the Daughters has caused him to miss a day of work. Jordan is so fanatical in his devotion that nothing can sway him from his duty. He reports anyone who attempts to do so.

Jordan is currently hoping to be chosen in an upcoming mating ritual by the Daughter Yvana. He is quite taken by her and believes that they will sire a male child who will be the envy of all others. He is considering approaching Yvana, but has been unable to do so.

Yvana is one of the Select Daughters of Hecate. As such she enjoys the privileges of being a city leader and having quarters of her own. She is also allowed personal audiences with the goddess to discuss matters of state and faith. This pleases Yvana immensely.

Yvana is ambitious but fair. She did not attain her position through unscrupulous means and it was this fact that brought her to Hecate's attention. Yvana is truly dedicated, devout and competent. But most of all, she can be trusted. She is every dictator's dream.

Currently, Yvana spends her time coordinating all the lesser Daughters in their efforts to undermine the tribes. She handles the stocking of the orphanages and writes detailed reports on the training of both new Hounds and Daughters. Her latest task is deciding who will participate in the upcoming mating ritual. She has decided to join the ritual herself, but is indecisive on whom to choose to father her child.

I have placed scripting sections at the end of each area description.

I have placed scripting sections at the end of each area description.

The players are likely to encounter the following “monsters” at the Twin Mothers:

This section sets up all the emotional role-playing opportunities present in the Twin Mothers.

Hecate hates the tribes of the wasteland and has passed this hatred on to her subjects. If the player enters this area with tribals in his party then the Hounds and Daughters will be rude and belligerent to him. If not handled with care, violence could break out.

Hecate is trying to destroy the tribes of the wasteland and produce a 'superior' race via her cross breeding experiments. The fact of the matter is that her superior race is indeed superior and does have a better chance of surviving the rigors of the world and the plague. Does the end justify the means? Should the individual tribes be replaced by a conglomerate race? Should natural evolution and survival of the fittest be restored?

We can check Karma via the player's responses in dialog and the actions he takes in dealing with the Twin Mothers.

Hecate's Daughters will be mentioned throughout the game.

There are no specific NPC uses in the Twin Mothers area. This is mainly a combat fest for the player with some story thrown in for spice.

There are a few quests in the Ouroboros area. Most of them are not really required; they are just there for story purposes and to give the player something to do. I have listed them in no particular order.

There are no merchant quests in this area.

There are no floating quests in this area.

The Ouroboros is home to one of the toughest tribes in the game. It is also the home to a woman who believes herself to be the incarnation of a Greek goddess. It would be nice if we could have some native Greek-like music to reflect this.

The basic ambient sounds for this area should be occupied village sounds.

The basic chart for SFX would be as follows:

The maps are in the locations section above. I'll have to move them down here.

Retrieved from "https://fallout.fandom.com/wiki/Ouroboros_design_document/2?oldid=2109601"
Community content is available under CC-BY-SA unless otherwise noted.