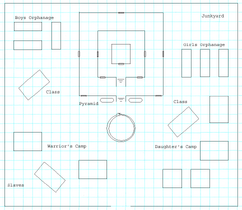 Ouroboros is a village in Western Utah. It is where Hecate, the mad tribal "goddess" resides, as well as the Vipers, a group of raiders from the west who serve her. Jordan Dae, the captain of Ouroboros' elite city guard, also resides here.

Ouroboros did not appear nor was mentioned in any of the published games, but was to appear in the canceled Fallout 3 project by Black Isle Studios code-named Van Buren.

In Greek, Ouroboros (ουροβόρος όφις) means "tail-devouring snake," and is usually depicted by a snake or dragon eating its own tail.[1]

Retrieved from "https://fallout.fandom.com/wiki/Ouroboros?oldid=3335832"
Community content is available under CC-BY-SA unless otherwise noted.