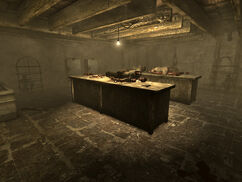 Talk to Old Man Harris, who will warn you to get away from the town. After talking to Harris, head to the abandoned shack or the basement of the Smith household.

Upon exiting the area, the player will be confronted by the residents of the town, with the exceptions of Junior, Jenny, and Old Man Harris. Jack Smith will engage the player in conversation and ask if he/she saw anything unusual. If you did not speak with Old Man Harris first, and you used Lockpick to open the door during the day, they will immediately attack you.

There are two speech checks in the dialogue tree. The first speech check option is to tell them that you thought about "getting a snack." Having the Cannibal perk changes this to a guaranteed success. If you choose to initially play coy by not answering straight, you will get another, easier speech check in the form of passive acceptance of their behavior (though this option will cause unintended issues). If you are successful at either speech check, in essence insisting that you did not see anything wrong and agree to keep their secret, the townsfolk will be kind to the player and you will be able to receive a free strange meat pie daily from Linda Smith.

On the other hand, if the player refuses to keep the secret, the residents will become hostile and attempt to murder the player, forcing you to kill them all. Afterwards, the player can proceed to Old Man Harris' house. He will then tell more of the town's history and will agree to help raise the kids right. He states that only after his wife died did he begin to question all the things that went on in Andale, and that not only was it a town of cannibals, but a town of inbred cannibals.

Retrieved from "https://fallout.fandom.com/wiki/Our_Little_Secret?oldid=1887756"
Community content is available under CC-BY-SA unless otherwise noted.