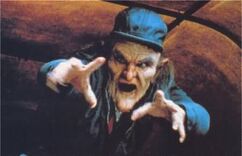 Otto Steed is a ghoul in charge of the Hoover Dam water purifier in 2253.

In the year 2253 Otto Steed is the chief engineer at Downtown and works closely with the engineers of the Rim. He is the only ghoul in all of Hoover Dam and, surprisingly enough, he is treated quite well. Otto can be located to Hoover Dam much like Beatrice, own that he wandered in from the wasteland. He arrived almost a year after Dodge takes over as Governor of Hoover Dam. He is first found staggering into town with nothing more than torn rags around his waist. At first the NCR soldiers were ordered to shoot Otto and be done with him, but Dodge's curiosity saved Otto from being riddled with bullets. Dodge ordered Dr. Yuri to nurse Otto back to health so Dodge could ask him about where he came from and if there were any more ghouls or Ghoul camps nearby.

When Otto was well enough to answer questions, he was very honest and said that he was banished from a ghoul encampment called the Reservation, far to the east. He then gave his real name, Otto Steed. He was grateful to Dodge for saving his life, so to repay him he offered to stay to fix and maintain anything that needed it. Dodge took him up on the offer and put him in charge of the two working generators in Baseline. His only barrier were the trogs and their leader, Billy-Bob. Otto would have to make nice with them before his work could commence. After he was able to become friendly with Billy-Bob and the trogs, he could then be able to make the generators perform better than ever.

Lastly, Otto is so gifted with mechanics that he does not even need a toolset to use his skill. Instead, he has bolts, screws and an assortment of tools screwed into various parts of his head that he removes whenever he needs to use them. He's essentially a living toolset, hence the special perk. He has an assistant named Dianne.

Otto has also been working closely with the former scribes on trying to make the filtered water drinkable – it can only currently be used for irrigation, and it is barely usable for this purpose. The player can help him with this problem by working with the city of Jericho and their filtration processes. The player does not need to be a mechanic or a science wiz to do this, but they will get more XP if they meet one or both of those criteria in the event that they upgrade the purification machine using the Jericho technology.

If the player agrees to help, Otto will give you the key to the Baseline and will become a companion.

Otto Steed was to appear only in Van Buren, the canceled Fallout 3 by Black Isle Studios.

Retrieved from "https://fallout.fandom.com/wiki/Otto_Steed?oldid=3419642"
Community content is available under CC-BY-SA unless otherwise noted.