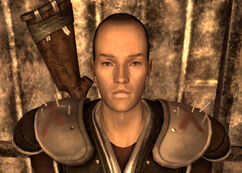 “Remember the rules: light armor and machetes only. And, of course, to the death.”

Otho runs the Legion arena at The Fort in 2281.

Not much is known about Otho, other than his sexism, which stems from Caesar's teachings that "women are beneath notice."

He has likely been in charge of the arena for some time, as he saw the legate fight as a recruit.

If you speak to him after completing Et Tumor, Brute? he may say "A woman actually proved useful for once. Caesar was bold to put his life in your hands" even if you are playing as a male character.[verified]

Retrieved from "https://fallout.fandom.com/wiki/Otho?oldid=3259318"
Community content is available under CC-BY-SA unless otherwise noted.