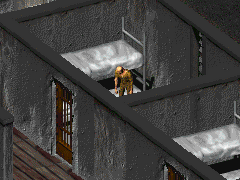 “Look, I'm just a guy, not the guy in charge - that's Darion. He's the one you want. He's got this thing about Shady Sands and that old bitch Tandi. He's got a hideout in Vault 15, even got the locals thinking he's on their side. That's all I know. Honest!”— Oswald to the Chosen One

An experienced brawler and outlaw, Oswald bears a cross hatch of old knife scars on his face and arms, with a crazed look in his eyes. He was one of Darion's scouts that were sent to NCR, but failed and was captured, but not until he managed to kill two of his captors. He chose silence afterwards, breaking it only to insult whatever interrogator was sent to make him talk.

Oswald appears only in Fallout 2.

Retrieved from "https://fallout.fandom.com/wiki/Oswald?oldid=3347220"
Community content is available under CC-BY-SA unless otherwise noted.