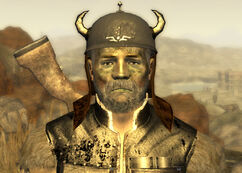 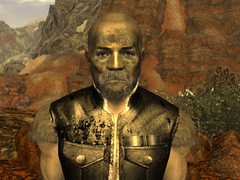 “Let me tell you something, that refugee camp? It's built on the blood and tears of my people. Nobody likes to talk about it, but I remember.”

Velasco used to live in Bitter Springs with the rest of the Khan tribe, leading a normal life, at least as far as raiders can have. However, when the Bitter Springs Massacre took place in 2278, he lost everything, his family gunned down by NCR 1st Recon sharpshooters stationed on Coyote Tail ridge.[1] Though the NCR tried to make amends, Velasco never forgave. He took to the hills and started a one-man guerrilla campaign against the NCR forces stationed at Bitter Springs, ostensibly to remind the Republic of the atrocity its soldiers committed.[2]

For three years he pursued his goal, intensifying his efforts in the past six months, as the NCR set up a refugee camp at Bitter Springs. He pursues his goal with a single-minded conviction that blinds him to the fact that he is, in fact, shooting unarmed refugees and NCR personnel trying to help them.[3] By the time the Courier enters Bitter Springs, his six month campaign has cost the lives of eight refugees and three NCR soldiers.[4]

Climb Ev'ry Mountain: Captain Gilles asks the Courier to find the source who is killing her troops and NCR civilians, which is Oscar himself. The Courier has three ways to deal with him: either kill him, convince him with a Speech check of 50 to leave and exact his revenge at Camp McCarran, or return to his fellow Great Khans at Red Rock Canyon.

Retrieved from "https://fallout.fandom.com/wiki/Oscar_Velasco?oldid=3188417"
Community content is available under CC-BY-SA unless otherwise noted.