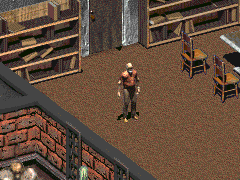 Head of the family

“What makes you think I'd want tribal like you in my family?”

Orville Wright is the head of the Wright family, the weakest crime family in New Reno, in 2241.

A well-dressed gentleman, Mr Wright is apparently perpetually pissed off, with his brown hair graying around the edges.[1] His area of work in Reno is alcohol brewing and distribution.

Following the defeat of the Enclave, the Wrights survived a bloody turf war and held all of Reno. Orville went on to oppose Tiaret Van Graff and her family over Redding's gold reserves, but could not openly fight her, as the NCR would wipe out the victor.

All his work is done under the nose of the head of the Temperance Union, Ethyl Wright, his wife. As the crime family follows a traditional, patriarchal model (at least officially), Orville manages every decision and draws strategy practically singlehandedly, which puts him under a great deal of stress daily, especially when one of his sons (usually Christopher Wright) talks back.

Around 2241, one of his sons, Richard Wright, apparently died of a Jet overdose—a blow particularly hard-felt since the Wrights pride themselves on their clean living, refusing to use drugs.

Orville Wright can be assassinated by giving one of his children playing outside the mansion a gun and telling them to turn off the safety, wave it around and point it at the father. Upon leaving and returning, Orville will be found dead and the gun laying next to him.

Orville Wright appears only in Fallout 2.

Retrieved from "https://fallout.fandom.com/wiki/Orville_Wright?oldid=2417152"
Community content is available under CC-BY-SA unless otherwise noted.