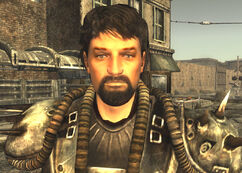 “Er, noticed that, did you? I keenly aimed one of the shots through some soft tissue of one of them to hit the man behind him.”

Orris is a conman and bodyguard for hire operating in Freeside in 2281.

This burly Freeside local is a bodyguard known for ripping off his clients by faking attacks on them and playing the hero. Ironically, he is one of the more popular guns for hire operating in the area, paying a group of local thugs to assist in his scam. His actions have earned him hundreds of caps, much higher than the average salary of his more legitimate co-workers. This is why he has attracted the suspicion of the King.

G.I. Blues: The King asks the Courier to find out why Orris is getting more money and attention than the other bodyguards.

Upon exposing Orris as a fraud to the King, he will no longer be available for hire. The King will explain this beforehand, saying that he will send some of his men to "pull Orris off the street when no one's looking." True to his word, the bodyguard will have disappeared from Freeside's north gate, having already been caught and taken away by the Kings.

Retrieved from "https://fallout.fandom.com/wiki/Orris?oldid=3382117"
Community content is available under CC-BY-SA unless otherwise noted.