HispanicOldAged
“Back then, it was war. If we'd been on the winning side, I'd be called a hero.”

Orion Moreno is a retired Enclave soldier living in the outskirts of New Vegas in 2281.

In 2241, Moreno was a proud soldier of the Enclave, serving as a heavy weapons trooper.[1] He was stationed at Navarro and served under Arcade Gannon's father (Judah Kreger after Gannon's death), together with Cannibal Johnson and Doctor Henry. Daisy Whitman was the squad's designated Vertibird pilot. Although both he and Johnson were the squad's heavy hitters, their philosophies differed, causing conflict within the group.[2]

Much of Orion's behavior stemmed from his dedication to the Enclave.[3] He never questioned the orders he received or the legitimacy of the Enclave's actions as to him, the Enclave was the United States, in one unbroken chain from George Washington to Dick Richardson.[3] The destruction of control station Enclave and the subsequent fall of Navarro splintered the squad, and Arcade Gannon's mother and a young Arcade Gannon fled south into the NCR.

Arcade remembers him saying "kiss America goodbye, boys" as they escaped Navarro.[3] They continued to flee east as Enclave personnel trying to integrate into the NCR were being found.[3] While other members of his squad moved on, Moreno remained stuck in the past, yearning to relive his glory days and resenting the NCR for what happened in Navarro.[4] The Mojave Campaign did not improve his view of the Republic, especially not when soldiers came to his house and informed him that he was squatting on NCR land near the sharecropper farms despite living there for far longer than the NCR occupied Hoover Dam.[5]

* He will only have these items when he has returned to the Enclave remnants bunker. 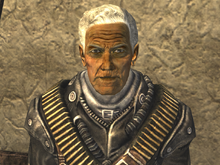 Orion without his glasses

Orion in the ending slides