2500 XP
“That's the spirit. I was a-hopin' you'd say that. Great. Just use this disk here on Vault City's central computer and then git it right back here. We'll use less uranium, the core won't leak so bad, and this Vault City won't have any reason to come exterminate us.”— Festus

Optimize the powerplant is a quest in Fallout 2.

There is an option to present McClure with a holodisk showing the power the plant could produce if optimized, and the player character can have McClure offer to speak to the Vault City council about a trade agreement with Gecko, but this does nothing to change the result due to a scripting glitch. Once the plant is optimized, Gecko's fate is sealed. Even changing the outcome of Vault City's dealings with NCR does nothing to change Gecko's ending.

Speaking with McClure is not necessary to download the optimization data, and no one will care if the player character did it without McClure's permission. 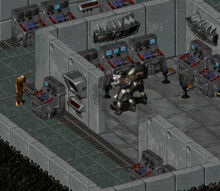