Opossums are creatures found in Appalachia.

Opossums are the mutated descendants of the pre-War North American Opossum, found throughout Appalachia.[1]

Opossums, also known as possums, are omnivorous creatures native to the Americas and can be found across Appalachia. The Great War has significantly affected their body, with toes sprouting out of their back and two tails. However, the most significant change are the faces that sprout throughout the front of their body, similar to brahmin and radstags. The placement of their heads vary, ranging from a triangular fashion, to having the left or right side of the body decorated with them.

Opossums, offer a small amount of experience when killed and flee from the player character if they are approached. They will drop opossum meat when killed.

A standard opossum that travels the Appalachian wasteland.

Opossums appear only in Fallout 76. 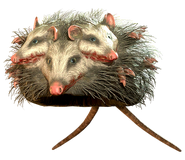 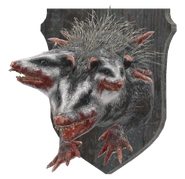