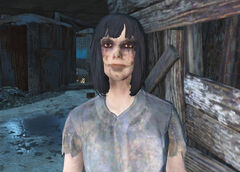 Ophelia is a dead wastelander in Nuka-World in 2287.

According to an unsent letter found on Ophelia's corpse addressed to her parents, she grew up in an underground bunker with her mother and father, but left the bunker against their wishes out of frustration and a desire to see the world above. She planned to run away to Diamond City, stating she will never see her parents again unless they came to visit her there. For unknown reasons Ophelia ended up in Nuka-World, and subsequently died in a room filled with traps in the Nuka-station section of the Gauntlet.

Ophelia appears only in the Fallout 4 add-on Nuka-World.

Retrieved from "https://fallout.fandom.com/wiki/Ophelia?oldid=3109051"
Community content is available under CC-BY-SA unless otherwise noted.