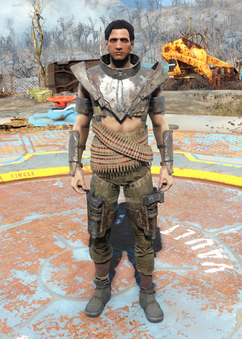 The Operators armor is an armor set in the Fallout 4 add-on Nuka-World.

This armor set comes in two slight variations with identical stats.
One torso variant is composed of shaped metal plates fitting over the top half of the body and bandoliers holding rifle caliber rounds over the lower half. The other torso variant has similar metal plates over the top half, but the bandoliers are replaced with leather belts. The two arm variants consist of a metal brace or padded armbands over the forearm. There is only one leg variant available, which are leather leg holsters holding either a wrench (on the right leg) or a mallet and pouch.