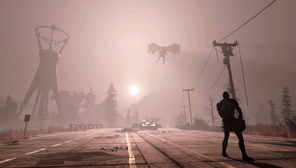 Operation Touchdown was the failed offensive mounted by the Appalachian Brotherhood of Steel to exterminate the scorchbeast threat in the glassed cavern, launched on January 29, 2095.[1]

After the emergence of the Scorched Plague around 2083, the rapidly-growing threat caused the Brotherhood to focus on eliminating the disease.[3] The primary transmitters were scorchbeasts, the large, mutated, rapidly-breeding bats that had the ability to infect and summon mind-controlled creatures.[4]

Using sonic generators designed by Scribe Takano and Scribe McNamara, the Brotherhood began actively fighting scorchbeasts by luring the creatures into a kill zone. Within these zones, the beasts would be attacked by the Brotherhood's automated surface to air missiles and ground personnel.[5]

Around 2093, the scorchbeast threat began to become too much for the Brotherhood to contain with such spread-out forces. They consolidated at Fort Defiance, their main base of operations, and the Thunder Mountain power plant, to maintain the facility's power.[6] Soon, out of desperation, the faction resorted to more aggressive measures to secure much-needed supplies.

By January 2094, the Brotherhood greatly increased requisitions from the Responders and Free States, with members ordered to firmly secure supplies without stealing or initiating conflict. Paladin Taggerdy also authorized the Brotherhood to ignore salvage rights claims, allowing members to take supplies and salvage from areas already claimed by others.[7] These aggressive actions further soured the Brotherhood's reputation and relationships with their former allies.[8][9][10]

Although the usage of the sonic generator was successful, the Brotherhood realized that there were too many scorchbeasts, delaying their inevitable defeat. As a permanent solution, the faction debated using a newly-discovered automated nuclear silo against the scorched threat. Though the scorchbeasts were predicted to be able to destroy all life on the continent, Elder Roger Maxson forbade the idea of using nuclear weapons.[11] The Brotherhood was forced to use conventional means, leading to the development of Operation Touchdown.

On January 29, 2095, the Brotherhood of Steel launched Operation Touchdown. The goal was to find and destroy the source of the scorchbeasts, code named the "End Zone."[12][13] Using the limited-range sonic scanning module schematics provided by Scribe Takano, the detachment tracked signals from point to point across the Cranberry Bog.[14] At each coordinate provided by the scanner, Knight Moreno would use a transponder to communicate the location's status back to Scribe Grant, stationed at Fort Defiance.[15]

First, the module pointed to an area southeast of Appalachian Antiques. There, Knight Moreno reported that the scanner worked, though the group encountered multiple Scorched and scorchbeasts.[16] Next, the module led to AMS corporate headquarters, where the squad was engaged in an intense firefight.[17] They then moved to survey camp Alpha, with scorchbeasts swarming the area. When Moreno attempted to report in, he realized that the radio was fried, but continued to log his reports locally.[18] Lastly, the scanner pointed to drop site V9, where the group discovered that the glassed cavern was the End Zone.[19]

The Brotherhood forces pushed through and entered the mine with a total of 11 scribes and four power-armored knights, led by both Knight Moreno and Paladin Taggerdy.[20] The strike force encountered heavy resistance from the Scorched and were met with casualties, yet they managed to continue advancing through the tunnels. The Brotherhood squad grew smaller as they pushed onward, sustaining attacks from mind-controlled creatures including fog crawlers, mirelurk queens, and scorchbeasts themselves.

The team eventually reached the heart of the nest, home to the scorchbeast queen and several lesser scorchbeasts. In the middle of battle, Knight Moreno got the last transponder online and recorded the final log. While planting explosive charges to collapse the tunnels, the team realized that the nest was actually a laboratory. As more scorchbeasts emerged from the surrounding tunnels and more Brotherhood soldiers fell, Paladin Taggerdy detonated what little charges were set.[21]

The ensuing explosions collapsed several tunnels and sections of the main cavern, killing any remaining members of the Brotherhood squad, including Taggerdy herself.[21] A massive earthquake was felt at Fort Defiance, with multiple tunnel collapses seen by spotters on the surface.[22]

For two weeks after Operation Touchdown, no scorchbeasts were sighted in the Cranberry Bog, with Fort Defiance seeing no assaults by the Scorched.[22] With Paladin Taggerdy and other survivors having failed to return from the operation, Senior Knight Wilson assumed command as the new commanding officer of the Appalachian Brotherhood. With clear skies, the faction assumed that the mission was a success and that the scorchbeast threat had been eliminated, albeit with a heavy cost.[23][1]

Soon after, however, scorchbeasts began to emerge in swarms from multiple different fissures.[22] They rapidly grew in number, and, by August 2095, the range of the sonic generator at Fort Defiance couldn't attract them all.[24] Both Thunder Mountain and Fort Defiance were overrun by the Scorched in mid-August, with all members manning their posts until the end.[25][26][27]

Retrieved from "https://fallout.fandom.com/wiki/Operation_Touchdown?oldid=3475353"
Community content is available under CC-BY-SA unless otherwise noted.