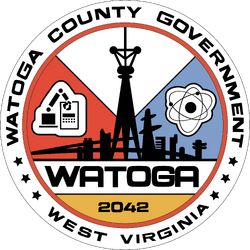 Operation Free Watoga[1] was the sabotage of Watoga's robot infrastructure and automated emergency services in 2077.

Angered at Watoga's elitist residents and having his citizenship application rejected, Scott Turner formed the Free Watoga People's Party with two other members.[2] Claiming Watoga belonged to "we the people," Turner temporarily caused chef-bots in the city to pepper-bomb prepared dishes, destroying the citizens' food.[3][4][5]

After refusing to accept another member into the group for "not having the stomach for what needs to happen," Turner began to work on compromising Watoga's robotic emergency service protocols to "begin the revolution."[6][5]

On October 22, 2077,[7] Turner breached the emergency service protocols, causing the city's robots to malfunction and attack everyone within Watoga. Simultaneously, Turner broke the transmission sequencer, disallowing others to remotely fix the machines. Turner also corrupted the software on the update terminals throughout the RobCo Research Center, leaving the terminal in his office the only machine capable of creating updates. To restrict access, Turner locked the terminal and prevented any badge other than his own from accessing the office.[1]

While Turner had only planned to make residents beg him to stop and require permission to live in Watoga, the city's emergency services massacred the technology-reliant citizens. Watoga fell into chaos as evacuation efforts led by Barbara Elizabeth, the city's mayor, fell apart, with some citizens literally running around on fire.[8] Any residents who weren't evacuated from the city perished.[9]

As a precaution in the event of her death, the mayor issued an executive order to instate anyone who entered her Watoga Municipal Center office as the new mayor for the day. Once evacuations were complete, Elizabeth had planned to negotiate a truce with the unknown saboteur, but succumbed to fatal injuries before she could do so.[8]

After the Great War the next day and learning of the innumerable deaths he inflicted in Watoga, Scott Turner showed deep remorse for his actions, recognizing himself as a "monster." After being scolded in a letter, Turner acknowledged that, while the plan surely would've caused chaos, he couldn't have known it would take place only a day prior to the nuclear holocaust.[10][7] With his dying breath, Turner revealed a way for others to circumvent his robots' reprogramming and live safely in Watoga.[11]

A message on Scott Turner's terminal indicates that Operation Free Watoga and the resulting murderous robots occurred in April 2077. This is discredited by Turner's last words and letters with Jennica, which illustrate that the event actually took place only a day prior to the Great War.

Operation Free Watoga is mentioned and its aftermath appears only in Fallout 76.

Retrieved from "https://fallout.fandom.com/wiki/Operation_Free_Watoga?oldid=3419815"
Community content is available under CC-BY-SA unless otherwise noted.