Operation: Anchorage! is a main quest in the Fallout 3 add-on Operation Anchorage.

The quest begins automatically after Paving the Way.

After destroying the Chimera fuel tanks and clearing the Listening Post of Chinese presence with the selected Strike team, the Lone Wanderer can now enter the heart of the map in order to disable the pulse field barring American power armored soldiers from attacking the Chinese base of operations.

With the last defensive barrier fallen, it is time for the assault on the Chinese compound, an occupied refinery. Once the field is disarmed the power-armored soldiers begin their attack on the Chinese compound turrets, and eventually destroy the front gates revealing the door to the final confrontation with General Jingwei. Cross the field and enter the building.

Report to General Chase and leave the simulation

Gain access to the VSS armory and take what you want

Back in the simulation pod at the Outcast outpost, the player character can now proceed to the terminal at the opposite end of the floor (where the Outcasts are already waiting) and open the armory. Inside, the player character will find assorted weaponry, ammunition, and other supplies including some unique items; refer to "Reward" below for a detailed listing.

Along with other more common items, such as:

The last 2 of the 10 intel suitcases required for gaining the Covert Ops perk can be found during this mission. Please refer to the main article for their locations.

It's also possible to return to the areas to get the cases from Paving the Way if they were missed.

After one completes the first mission, the war correspondent asks several troops to strike a heroic pose. This pose is identical to that of the Anchorage Memorial. He also tells the troops that maybe someone will make a statue from the picture. 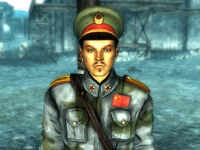 General Jingwei as he appears in conversation at the final confrontation of the Operation Anchorage simulation
Deutsch Español Русский Українська
Community content is available under CC-BY-SA unless otherwise noted.
... more about "Operation: Anchorage! (quest)"
RDF feed
Has platform
Playstation 3 +, Xbox 360 +  and PC +
Advertisement