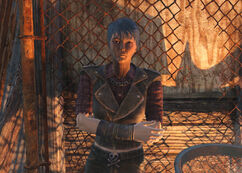 Opal is a human living in the Commonwealth in 2287.

Opal is a merchant who is living on some rooftops west of the Custom House Tower.

Opal appears only in Fallout 4.

Retrieved from "https://fallout.fandom.com/wiki/Opal?oldid=3122963"
Community content is available under CC-BY-SA unless otherwise noted.