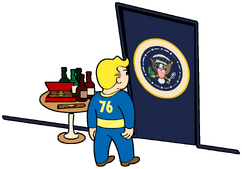 Complete One of Us

“Delve into the depths of the Whitespring's Congressional Bunker.”

One of Us is a main quest in Fallout 76.

After managing to enter the bunker of Sam Blackwell and acquiring the holotape titled "Welcome to the Whitespring," after listening to it, travel to The Whitespring Resort and head for the entrance to The Whitespring bunker to gain entry to the vault hidden within. After taking a photo and collecting one of two underarmor options given to the player characters, they are then directed to speak with the bunker's artificial intelligence, MODUS.

After either taking the entrance questionnaire or skipping it by speaking to MODUS, the next step is to collect the system access tape from the dispenser next to MODUS and take it to Sugar Grove to upload it into the system there and initiate the external connection to link MODUS with the systems at Sugar Grove, though the terminal where the upload needs to be performed may be guarded by a legendary Colonel Gutsy robot or a high-level assaultron with stealth abilities. Upon loading the tape and receiving the data while providing MODUS an uplink with SigInt, it triggers an alarm inside the facility. This sends a security team of Mr. Gutsy and Protectron robots to engage the player character. Once they've been avoided or dealt with, module instructions will be dispensed from the archival dispenser down the hallway. Take those back to the Whitespring bunker and deposit them in the collector machine there. This provides an uplink module that MODUS needs to be installed at the National Radio Astronomy Research Center by deploying it on the roof.

Once that is done, MODUS is understandable as to why the player characters wanted to join the Enclave as the Kovac-Muldoon Platform has revealed the Scorched and Scorchbeasts to MODUS, making it realize the threat they pose to Appalachia and why the player characters needed access to the Appalachian Automated Launch System. MODUS has the Kovac send down a care package for the player character. Collect what's inside, which includes an Orbital scan beacon and Orbital strike beacon, and return to the Whitespring and report to MODUS, and the quest is completed as MODUS welcomes the Vault Dweller to the Enclave, rewarding them with the Bunker Buster missile launcher.

If the player characters have not completed "Back to Basic" at Camp McClintock before finishing this quest, MODUS will mention heading there to become a U.S. soldier first before granting access to the entire Military Wing of the Whitespring Bunker to trigger "Officer on Deck" and begin working up the ladder to becoming a General and getting access to the Appalachian Automated Launch System.

Retrieved from "https://fallout.fandom.com/wiki/One_of_Us?oldid=3421719"
Community content is available under CC-BY-SA unless otherwise noted.