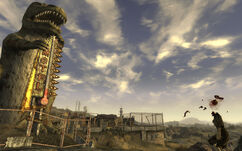 “My wife's dead. I want the son of a bitch who sold her.”— Craig Boone

One for My Baby is a companion quest in Fallout: New Vegas.

The quest's name is a reference to the famous torch song "One For My Baby (and One More For the Road)" by Harold Arlen and Johnny Mercer. It was popularized by Frank Sinatra, Dean Martin, Sammy Davis, Jr., Billie Holiday, and more recently, Hugh Laurie.

Retrieved from "https://fallout.fandom.com/wiki/One_for_My_Baby?oldid=3409686"
Community content is available under CC-BY-SA unless otherwise noted.
... more about "One for My Baby"
RDF feed
Has platform
PC +, Playstation 3 +  and Xbox 360 +