Fallout Wiki
Register
Don't have an account?
Sign In
Advertisement
in: One Man, and a Crate of Puppets
English

One Man, and a Crate of Puppets is an official Fallout webcomic written by Jerry Holkins (aka Tycho Brahe) and illustrated by Mike Krahulik (aka John Gabriel), (creators of the video game webcomic Penny Arcade), co-created with Fallout 3 lead designer Emil Pagliarulo. In July 2008, the comic was launched on the official Fallout 3 website July 2008, updated weekly.

The comic follows the life of the sole inhabitant of Vault 77 and his crate of puppets. The first strip also shows Vault 43 and Vault 69. At the beginning of the comic, the protagonist discovered that he was the only living person in Vault 77, accompanied only by a crate of puppets, as part of the Vault Experiment. During the first months, the Vault Dweller went through the initial panic and depression caused by being locked alone in a Vault. He didn't actually open the puppet crate until one year, three months, and twelve days after the lock-up. After apparently developing a multiple personality disorder (his second personality being in the form of a "talking" Vault Boy puppet), he opened the vault to find himself in front of a radscorpion the size of a Boeing 747 to which he quickly closed the vault.

After taking some time "to sleep on it," the Vault 77 Dweller was successful in leaving the Vault, riding a giant ant he named Mr. Pinch. In regards to the outside world, he was rather positive, noting while it was hot for December he wasn't really a snow person. He has run into a mysterious ghoul that has only one arm and wears a vault suit without a visible number.

He is later captured by slavers. While they debate on whether to enslave him or simply eat him, the vault dweller tries to warn about his puppet, as it's "crazy" and has "killed before." That night, one of the slavers in a panic runs to another group of slavers, telling them "the puppet man" has killed his partner and is coming for them. The final comic shows the Vault 77 Dweller, along with the puppet, standing amongst the pile of dead slavers, covered in blood. The narrator concedes that the vault was a failure, but reminds the reader that "the Vaults were never meant to save anyone."

In the Fallout 3 slaver barracks in Paradise Falls, there is a Vault 77 jumpsuit and a holotape on a shelf hidden behind the stairs. The holotape is recorded by a slaver who mentions the jumpsuit and a stranger with no name that may return, an idea they are fearful of.[1]

The cave outside Vault 77 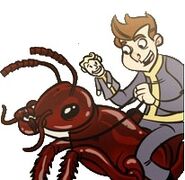 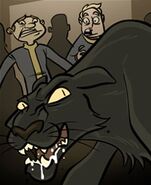 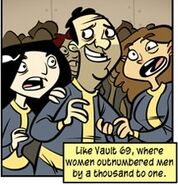 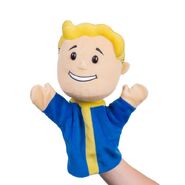