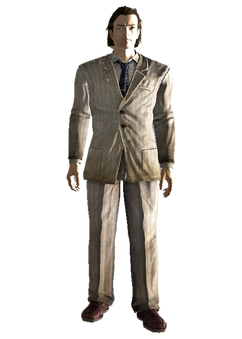 “You have no idea who you're messing with!”

Omerta thugs are Omerta gang members found in Gomorrah in 2281.

They serve as muscle for the gang, and guard the Gomorrah. Also known as the Mafia, Omertas follow the Mafia's strict orders, and normal regulations. They're straight-forward, and don't have the people skills that the other two families do, so they make up for it in the only ways they can think of—alcohol and prostitutes.

Retrieved from "https://fallout.fandom.com/wiki/Omerta_thug?oldid=3196344"
Community content is available under CC-BY-SA unless otherwise noted.