The Olney sewers are a small sewer system located underneath Old Olney in the Capital Wasteland in 2277.

The sewers are accessible by either a manhole between two ruined buildings in the southwest corner of town, or by stepping upon a grate in the northeastern part of town, two blocks north of the fire station and directly north of the barred up building with the dead mercenary on the stairs. Note that the sewers, much like the city above, are infested entirely with deathclaws.

Entering through the manhole, one can either head south through a large metal door or follow the sewer northwards.

The large door in the south leads to a room with a generator. A small door in the east allows access to a hallway, whose doors gives access to two rooms and a partly collapsed tunnel; the first room on the left (E) has a workbench, the second room (A) holds various loot, a deathclaw and three wall safes in the back, and the partly collapsed tunnel (B) has several bodies, among them a Brotherhood of Steel initiate with a unique power armor. The tunnel has been breached on its southern side, leading to a skeleton (C) holding a spoon and a skill magazine underneath it.

Following the sewer northwards leads to multiple deathclaw encounters. After the first curve, one can either head through a large metal door in the east or follow the sewer northwards. The large metal door leads to a small room with an average locked safe and a closet (D) with a very hard lock. Heading north instead, leads to a collapsed wall with a ladder on the left leading to the Old Olney underground (only with Broken Steel), and a door on the right leading to a maintenance room.

Inside the room, a skeleton holding an ID is located next to a locker on the western wall and an average locked terminal, found on the eastern wall, can be used to activate a Protectron. Heading through the northern door will lead to a blue door leading back the surface. Back there, one will seemingly be trapped in a small pit. However, if the grate above is lowered, one can "climb" out of the pit by facing the northwestern corner and jumping continuously while also moving forward.

The Olney sewers appears only in Fallout 3.

You'll be welcomed with open arms! 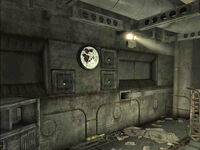 Location of Duck and Cover!