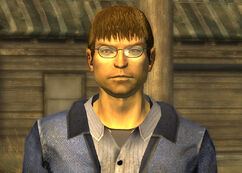 “Fuck off! Win your own fucking lottery!”

Oliver Swanick is a former Powder Ganger who won "the only lottery that matters." He is found during the Courier's first arrival at Nipton in 2281.

A former Powder Ganger, Oliver Swanick was captured in the Legion's "cleansing" of the town of Nipton. As the winner of Nipton's lottery, he was the only person allowed to leave the town alive and unharmed. When first encountered, he is excessively jubilant over this fact.

When first entering Nipton, Swanick will run toward the Courier and initiate conversation. He will approach the Courier regardless of which direction they enter the town.

Retrieved from "https://fallout.fandom.com/wiki/Oliver_Swanick?oldid=3268605"
Community content is available under CC-BY-SA unless otherwise noted.