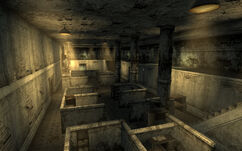 “It was not intended for war - its top sides are bound to two intake towers by a series of bridges. No doubt snipers nest there. On the far side of the dam, a small building provides access to the power plant below. That is where Oliver hides.”— Legate Lanius

Oliver's compound is a location within the Hoover Dam in 2281.

General Lee Oliver's compound is a small office in the Hoover Dam that he uses to brief the player character before the quest Eureka!, or conversely where he makes his last stand in Veni, Vidi, Vici. General Oliver states that there is a secret passage, somewhere in the compound, that he can use to escape from the Hoover Dam.

It is accessed by way of Hoover Dam power plant 04. A radio sits outside of the doorway, which is inaccessible unless the player character is completing either endgame quest.

The layout of the compound is that of a standard office building cubicle setting. However, there are desks piled in hallways, force fields, and traps set up to defend the general.

Even during the endgame quests, regardless of the side chosen, taking anything from the containers is still considered stealing.

Signs to the compound and for safety

The compound is locked tight

Add a photo to this gallery
Retrieved from "https://fallout.fandom.com/wiki/Oliver%27s_compound?oldid=3412733"
Community content is available under CC-BY-SA unless otherwise noted.