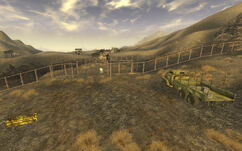 “Nuclear waste disposal. Pre-War, people figured there was so much desert in Nevada, you might as well turn it into a big dumping ground.”— Arcade Gannon

The old nuclear test site is a location in the Mojave Wasteland in 2281. It is located equidistant from Caesar's Legion safehouse to the northwest and the crashed vertibird to the southeast.

The location appears to have served as a pre-War nuclear weapon test range and waste disposal area, causing the entire vicinity to suffer from persistent radiation.

Although the site is mostly fenced off and inaccessible, the nuclear test shack within the compound can be entered. On a nearby hill, northwest towards Caesar's Legion safehouse, an observation area with five chairs and five pairs of authority glasses overlooks the location.

Retrieved from "https://fallout.fandom.com/wiki/Old_nuclear_test_site?oldid=3337658"
Community content is available under CC-BY-SA unless otherwise noted.