PSN
“There is an expression in the Wasteland: "Old World Blues". It refers to those so obsessed with the past they can't see the present, much less the future, for what it is.”— Doctor Mobius and Doctor Klein, Old World Blues

Old World Blues is the third add-on for Fallout: New Vegas, developed by Obsidian Entertainment and published by Bethesda Softworks.

“In the years before the Great War, Big Mountain had been the home to the brightest minds of the 21st century. Scientists of vision were drawn to the facility to tackle the greatest technological challenges of the era. They sought to create a new world, fueled by technology, for the benefit of all mankind.


The nucleus of this research was the Dome, a huge stone facility that held the labs of every science known to man. It was a think tank where no problem could not be solved, where no question could not be answered.


The Great War brought a new energy to Big Mountain and its scientists. Although sheltered from the frontlines, the scientists waged their own war, fighting their battles at the atomic level. Equations and calculations marched endlessly across chalkboards and computer terminals toward one solution: Winning the war.


For years, the minds and computers of Big Mountain were a blaze of trajectories, weapon schematics, and nuclear theories. The problems began to outpace the solutions, first geometrically, then exponentially. As the war escalated, so did the questions.


On the night of October 23rd, 2077, the scientists received an answer that put all their questions to rest. In the aftermath, Big Mountain's silent experiments went to sleep, their creators slowly dying in the new world that had been left behind.

And the great stone in the middle of the Big Empty lay untouched, filled with countless technological wonders... Wonders that, in the end, had been answers to the wrong question.
”— Mobius, Old World Blues Intro

In Old World Blues, the Courier is abducted and experimented upon by the Think Tank, a group of pre-War scientists that have replaced their aging bodies with machines. Learning that the Think Tank has removed and subsequently lost the Courier's brain, the Courier aids the Think Tank scientists in fighting Dr. Mobius, the rogue scientist currently in possession of their missing brain. Exploring the Big MT facility, the Courier rediscovers lost technology and fights off lobotomites, robo-scorpions, and more.

Finally meeting Dr. Mobius, the Courier learns that he is not actually evil, but has messed with the Think Tank's memories and constantly threatens them in order to keep them from experimenting on the entire wasteland. By stealing the Courier's brain, Dr. Mobius was preventing the Think Tank from using the brain's unique properties to move their own brains into host bodies and escape the crater. After choosing what to do with Mobius and reacquiring their brain, the Courier returns to the Think Tank and can choose to either convince them to stay in Big MT or to kill them.

This section is transcluded from Fallout: New Vegas locations. To change it, please edit the transcluded page.

Doesn't count against the Endurance limit of original implant perks.

This section is transcluded from Fallout: New Vegas traits. To change it, please edit the transcluded page. 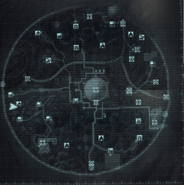